I'm a total nerd and wrote this post a while back, but never posted it b/c I was waiting to off load this one picture we got at the concert outside of FedEx Field. 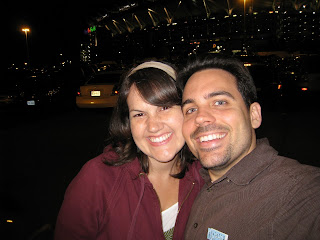 Here is my review of the concert:

Andrew and I left our sweet babies with some trusted friends and had a date- at a U2 concert! Andrew bought the tickets a few months before Kaitlyn was even born and it was much harder than I thought it would be to leave her for that long. After the first band, Muse, played and we were waiting for U2- Andrew said, "what do you think they are doing right now?" I said, "oh Nate is probably asleep and Kaitlyn is probably fussing for a bottle." He looked at me and said, "no, I meant the band." I guess that goes to show that you never stop thinking like a mom. I was able to relax and enjoy myself though, even though I had a back injury so it was kind of hard to sit. Anyways, the following is a review (with some edits) I wrote to a friend who also went right after the concert:

I liked the concert a lot more than was expected. We got there about 7:30- Muse was already playing. Since Andrew was really excited about them, he was kind of bummed that we were late but we only missed 1 or 2 songs, I think because we couldn't hear any music when we got out of our car. We got to park pretty closely. We started up the long trek to our seats and heard everyone start screaming and the music playing. We sat in row 18, so we were pretty high up. It gave us a good overview of the stage and all of the effects, though. At first, I said to Andrew, that Muse just sounded like noise and I couldn't understand a darn thing they were singing. Then they sang a few songs I recognized from Andrew insisting on me listening to them in the car. And I have to say it is way better when you know the songs because even if you can't necessarily understand the words, you can still sing along. I really liked watching the drummer- he was really into it. During intermission, we tried to spot our friends who had standing tickets near the stage, but to no avail.

As far as U2 goes, I recognized a lot more songs then I thought I would. I wasn't too impressed at first, but once they started into the special effects with the screen moving and changing shapes and colors, I really got into it. Those guys sure put on an energetic show and it was fun to watch the band members in action. When they first turned out all of the lights and everyone started screaming, my grandma side came out, and I thought "oh boy, this is going to be a long night." Once I went along with the ride though, I had fun. We had an older couple sitting in front of us, so they never stood up. It was great because we could stand up when we wanted to and rock out and when we sat back down, we could still see everything. We were also making fun of this couple right in front of us that kept rocking out and singing to each other. It was pretty comical. I was bummed that we didn't bring in our camera because I read the sign that said "no cameras" and actually believed it. We were envying everyone around us getting great panoramic shots of the stage with their cameras.

During the last song before the encore, we left because my back was killing me. I hurt it a few days ago and I have to lay on a heating pad every few hours, so this was stretching it. I also didn't want to wait in traffic being that uncomfortable. Andrew again was not thrilled, but we left a little before 11, went to the babysitters to pick up our kids, and were home by 11:30. It was great!

So we missed the encore, but I think it was worth getting home and not having to wait in horrible traffic. All in all, we had a fun date and the experience was enjoyable- Andrew absolutely loved the concert! It was my first rock concert and, in spite of myself, the next day I couldn't help but sing the tunes. By the end of the day, Nate was singing right along with me. Go U2!
Posted by Molly at 9:20 PM 1 comment: