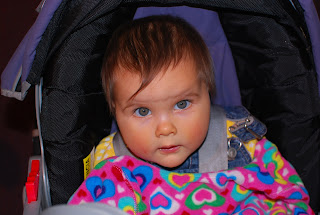 A friend of ours took this picture of Kaitlyn and I just had to post it.
Posted by Molly at 1:35 PM 2 comments:

Here are two of our most recent videos of the kids. The first one demonstrates Nate's shark naming skills and the second is of Kaitlyn talking and moving and grooving.

So I didn't want to blog after my beautiful Hawaii post because I didn't think anything could beat that. However, it's not true. My darling kids are getting cuter by the day and growing and changing so much. Nathan is talking up a storm and has become very polite. He says "thanks" a lot and still uses his please sign as he's saying the word "pease." He's mastered the names of sharks in his shark book and he loves dinosaurs just as much. Of course anything that is scary with teeth. He's such a boy. His nursery leaders have predicted that he will be a football player, which is a nice way for them to tell me that he likes to tackle the other kids in nursery. Poor Kaitlyn gets tackled almost daily but she just grabs his hair and yanks on it. Nate performs for her by dancing around in circles or jumping off the couch. She cracks up at him which keeps him going. KK, as Nate calls her is rolling around a lot and is getting quite excellent at her plank poses. She then puts her bum in the air and takes a few steps with her feet before plopping back on her belly. She squeals a lot and is pretty feisty. She also says "ba ba ba" which I'm sure means mama :) and blows raspberries with her mouth. At her 9 month check up, she weighed in at 20 pounds. She's an awesome eater, what can I say. She eats anything we give her and her favorites lately have been avocado, bananas, and black beans. My favorite days are when Nate plays with Kaitlyn and brings her toys, we dance around to music, and KK giggles at Nate's goofiness. Being a mom is pretty great, super hard, but pretty great! 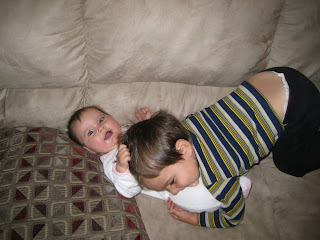 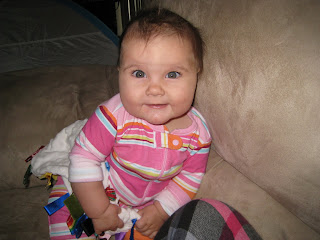