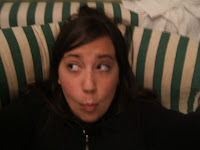 So it is already June! I can't believe it. I let May completely go by without posting a thing. My sister Doree came to visit at the end of April- mostly to see little Nathan, although she claims she wanted to see me too. We made sure to do one thing a day. We went to the arboretum for a picnic, to the zoo to see the elephants especially and a funny little orangutan that was sitting in the middle of a cable wire with his butt to us and only people underneath; to the Amish market for some fresh watermelon and Philly Cheese Steaks, and to Arundel Mills to do some outlet shopping of course. We also did a lot of baking and movie watching- it was quite a fun time! Sister time is 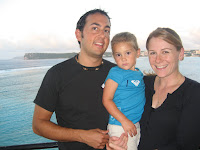 the best!
My brother Jake and his family moved back to Maine after being in Guam for a year and a half, so of course Nathan and I had to take a trip to see them. Cousin Riley (just turned 3) was so excited to see Baby Nathan (BN as Jake calls him). She would always comment on his "baby hands" "baby feet" "baby nose" and baby everything. She even helped feed him and every morning would come in to our room and lay next to him. She pushed him in his new umbrella stroller, until she decided she w 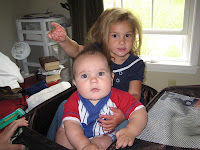 ould rather push her own cabbage patch doll. Jake put Nate's hair in a mohawk and Riley keep yelling at him to put it down- she doesn't like change. We saw some beautiful lighthouses and New England scenery. We also got homemade ice cream everyday and went to the beach. Nate loved eating and squishing the sand, but we didn't dare go in the water because it was too cold. Sanford is definitely out in the country and I enjoyed going to sleep while listening to the chirping of the bugs. I also en 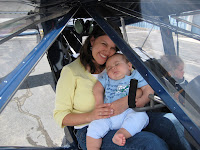 joyed the Speidel's new TiVo- quite an awesome invention. Someday we'll get one. I guess we should work on getting a house first. It was really nice having all the space that goes along with a house. What a concept to have more than 1 room! I felt like I was living in the lap of luxury.
My dad and brother took us to the little Sanford airport. Airforce One actually flies into it when the Bushes come to stay in their Maine beach house. My dad got Nate a shirt that said, "My grandpa's airplane is faster than your grandpa's airplane" which of course he had to wear to the airport. We did have an unfortunate event that happened on the trip. My brother wanted to show me the PBY (a huge and very old airplane built for WW2 that he flew from Alaska). He had injured his shoulder lifting weights and was told to be careful with it, but of course as he was climbing on top of the PBY, he fell through a hatch that was on top of the plane and tried to catch himself with is bad arm. In the process, he dislocated his shoulder. It took the EMT's 3 hours to build ramps up to the airplane to transport him off of it. He was in such pain and I felt so bad for him. His arm finally went back into place after he was on morphine and his muscle was able to relax. Needless to say, that put a damper on the trip. He is doing better though, but might have surgery for it to properly heal. Poor guy!
Posted by Molly at 1:45 PM

What darling cousins. Maine sounds heavenly. I've never been to New England but I've always imagined it being so picturesque.

I remember having a shirt that says "My Grandpas a Pilot." I thought it was so cool.

And I agree with Tivo. I had my own when I lived with Cami. It was nice when I had to work/sleep when my favorite shows were on. Cami loves it because a lot of their shows are on when they are putting the kids to bed. We'll put that on our "eventually" list too, but then again we'd have to get satellite or something to make it worthwhile. All in good time.

I have been wondering what ever happened to you guys. I'm glad I found your blog! (via somebody else) You look like your having a great time back east. How old is your baby now? ours just turned two. We are linving in utah, going on three years now.
mary

Riley looks like a crazy cat woman with wild hair in that picture--so funny. Must get my comment up before Doree
-Alexis

Geeze, I would have read your blog sooner if I knew I was going to be on it. Great job at recapping our lovely time together!

Nathan is so cute!! Can't wait to meet his little sister! (it's a girl, right?)

we need to get together! do you have fun 4th of july plans? we're gone next weekend but here for the holiday and the week after!

we love you guys!