Here is a quick Halloween post. So it was 4:30 on Halloween and we had to be at the church at 5:00 to set up for the Halloween party. We didn't really have costumes. The kids were going as a pirate (see the post about Nate's b-day to get his full pirate attire) and a flower. I told Andrew I thought it would be fun if we had a family theme. This is what we came up with: 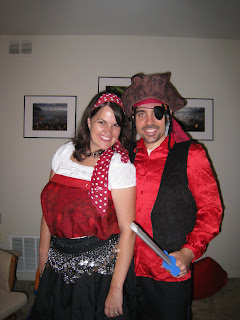 Andrew used Nate's wig and hat since Nate wouldn't keep it on. I went as his pirate "maiden," although he informed me that it's actually called a wench. 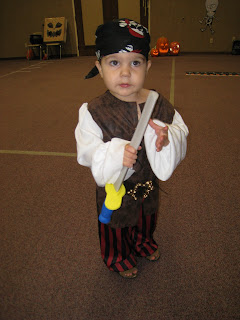 We found a bandana for Nate, which he kept on most of the night. 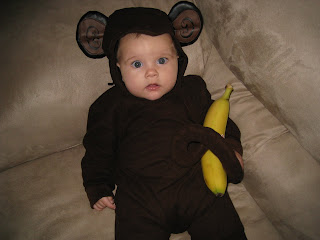 And little Kaitlyn went as our pet monkey. We had this costume from when Nate was a baby and decided it went better with the theme then a flower. 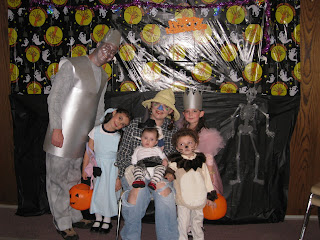 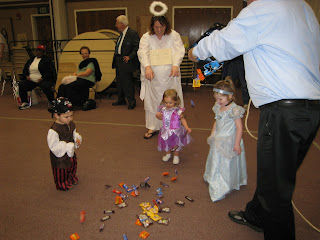 The ward party was small, but fun. I had to include this pic of the Stromsdorfers and their family theme of "The Wizard of Oz." They looked adorable! The primary put on a cake walk- Nate was so excited about the cupcakes of course. They also had a fishing pond put on by the "Fishopric", well actually their wives. There was also pin the bone on the skeleton, the jackolantern ball toss from Nate's b-day, a nerf gun game, and pinatas. Nate was more excited to put the turtle head in his bag then the candy, though- kind of funny. We then did trick or treating in the classrooms around the church and the next day when we went to church, Nate said "trick treat?" He wanted to do it again, apparently. 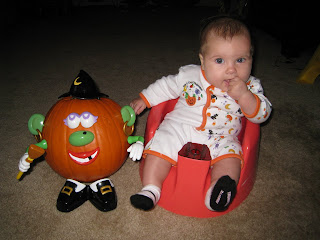 This is our jackolantern for the year. Mom gave this "Mr. Potato Head" kit to Nate and it was the easiest jackolantern I've ever done. Andrew did make a pirate jacko, but we didn't get a pic of it. 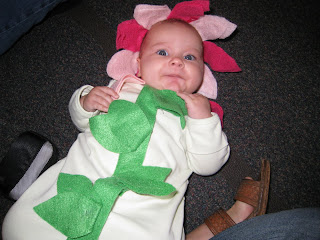 This is Kate's reject costume that I made, but she did get to wear it at a play group earlier in the week, so it wasn't a total waste.
Posted by Molly at 10:15 PM